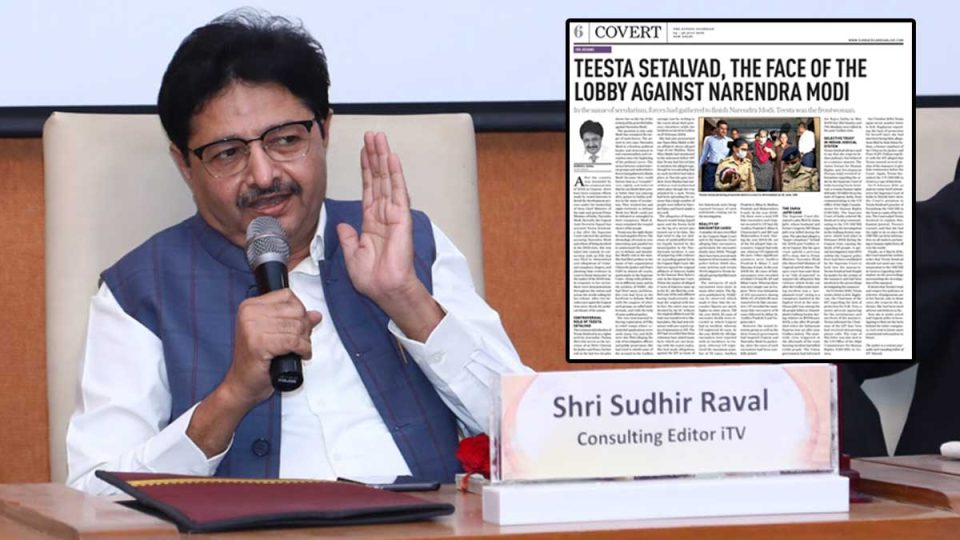 In the name of secularism, forces had gathered to finish Narendra Modi. Teesta was the frontwoman

After the country was wounded by the communal riots of 2002 in Gujarat, there have been constant efforts made by vested interests to derail the development process under the leadership of then Chief Minister of the state and present Prime Minister of India, Narendra Modi. Recently, the Gujarat Anti-Terrorist Squad has arrested Teesta Setalvad, a day after the Supreme Court rejected the petition accusing Narendra Modi and others of being involved in the 2002 riots. She was taken into custody in connection with an FIR that was filed in Ahmedabad over allegations of “criminal conspiracy, forgery, and planting fake evidence in court to frame innocents” in the matter of the 2002 riots. In response to her arrest, there were demonstrations throughout the nation and across the world calling for her release. After two decades once again the Gujarat riots story shook the political climate of the nation.

The common introduction of Teesta Setalvad is as a rights activist, journalist, Padma Shri who serves as the secretary of an NGO, Citizens for Justice and Peace, but her role in the last two decades shows her as the tip of the iceberg of the powerful lobby against Narendra Modi.

The question is why only Modi has remained the target of such forces. The answer is very easy. Narendra Modi is a fearless political leader and determined to end communalism and corruption since the beginning of his political career. The nexus between vested interest groups and authoritative forces had gathered to finish Modi because they could foresee him as a “crusader” very rightly and believed that he can finish their power lobby that was playing dirty games in Indian politics in the name of secularism. They worked day and night tirelessly to defame Modi but Modi could not be defeated or entangled in their conspiracy. Modi always remained the trusted choice of the people.

Teesta was the right choice for such negative forces. The chronology of events is very interesting and painful too to understand the conspiracy to defame and destabilise Modi’s rule in the state. She had filed petition in the name of her organisation Citizen for Justice and Peace (CJP) in almost all courts, particularly in the Supreme Court. Along with petitioners in different cases, and in the petition of NHRC, she had filed many petitions. Her role had been in the forefront to defame Modi with the support of other such groups, so called intellectuals, and with the help of some political parties.

She was instrumental in forcing registration of FIRs in relief camps where cyclostyled applications were used; many IAs and SLPs were also filed alleging the role of investigation officers and public prosecutors. She had tried to shield some of the accused in the Godhra carnage case by writing to the courts about their presence elsewhere while the incident occurred at Godhra on 27 February 2002.

She had also pressurised one Nanu Miya Malek to file an affidavit about alleged rape of one Madina. Nanu Miya Malek had mentioned in his statement before SIT that Teesta had forced him to mention the alleged rape, though he was pleading that no such incident had taken place at Naroda-gam incident. Even Madina had stated that no such incident had taken place though she was attacked by a mob. Teesta had been spreading the rumour that a large number of people were killed in Naroda Patiya and burnt inside a dry well.

The allegation of Kausar Banoo’s womb being ripped open and the foetus held on the tip of a sword also turned out to be false. She had tried to dig out skeletons of unidentified bodies legally buried by the municipality in the Pandarwada incident. A case of tampering with evidence etc. is pending against her in the Gujarat High Court. She had not signed the original affidavit of Zaheera Saikh in the famous Best Bakery case in the Supreme Court. When the matter of alleged U-turn of Zaheera came up in the SC, she filed the certified copy of the said affidavit saying inadvertently she kept the original with her. In fact, the entire case was decided by the SC without the original affidavit and the trial was transferred to Maharashtra. She had sent witnesses with pre-typed copies of statements to SIT. The SIT had recorded that these witnesses have stated many facts which are not keeping with the typed copies. She had made allegations against the SIT as many of her falsehoods were being exposed because of such statements coming out in the investigation.

A number of cases were filed in the Gujarat High Court and in the Supreme Court alleging fake encounters, particularly the encounter deaths since 2002. Though there have been several such instances of encounters with police before 2002 also, some activists and certain NGOs aligned to Teesta Setalvad’s group had filed such petitions.

However, the vested interests group as well as the then-Central government had targeted Gujarat and Narendra Modi in particular, since the cases of such encounters had been carefully picked.

The Supreme Court dismissed a plea filed by Zakia Jafri, whose husband and former Congress MP Ehsan Jafri was killed during the riots. The plea had alleged a “larger conspiracy” behind the 2002 post-Godhra riots in Gujarat. But the apex court upheld a previous SIT’s clean chit to Prime Minister Narendra Modi (the then-Chief Minister of Gujarat) and 63 others. The apex court had said there is no “title of material” to support the allegation that violence which broke out after the Godhra train burning incident was a “pre-planned event” owing to a conspiracy hatched at the highest level in the state. Ehsan Jafri was among the 68 people killed at Ahmedabad’s Gulberg Society during violence on 28 February 2002, a day after 59 people died when the Sabarmati Express was set afire near Godhra station. The statewide riots triggered in the aftermath of the train burning incident had killed 1,044 people. The Union government had informed the Rajya Sabha in May 2005 that 254 Hindus and 790 Muslims were killed in the post-Godhra riots.

Teesta Setalvad always used to say that she respects Indian judiciary but behaved in a contrary manner. The Asian Forum for Human Rights and Development (Forum-Asia) received information regarding the order by the Supreme Court of India banning Teesta Setalvad, a woman human rights defender (WHRD) from the state of Gujarat, India, from communicating to the UN Office of the High Commissioner for Human Rights (OHCHR). The Supreme Court of India ordered Ms Setalvad to stop communicating to the UN OHCHR regarding the investigation in the Gulbarg Society massacre, which took place in February 2002 during the Gujarat riots, causing the death of 69 people. A special investigation team (SIT) within the Gujarat police force had been established by the Supreme Court to look into the massacre. Teesta Setalvad had fought for justice for the victims of the massacre and had been involved in the proceedings investigating the massacre.

On 5 October 2010, Teesta wrote a letter to R.K. Raghavan, the Chairman of the SIT regarding the lack of protection for S.M. Vora, a senior advocate appearing for the eyewitnesses and survivors of the massacre. Teesta informed the Chairman of the SIT that Vora had received threatening phone calls. The copy of this letter was also sent to the UN Office of the High Commissioner for Human Rights (OHCHR) in Geneva.

On 7 October 2010, Teesta again wrote another letter to R.K. Raghavan regarding the lack of protection for herself since she had also been facing false allegations filed by Rais Khan Pathan, a former employee of the Citizens for Justice and Peace (CJP). Pathan together with the SIT alleged that Teesta tutored several victims of the massacre to give false testimonies before the Court. Again, Teesta furnished the UN OHCHR in Geneva a copy of this letter.
On 17 February 2011, an amicus curiae brief submitted to the Supreme Court of India by Harish Salve drew the Court’s attention to Teesta Setalvad’s practice of furnishing the OHCHR in the Geneva copies of her letters. The Court asked Teesta Setalvad to explain this. Kamini Jaiswal, Teesta’s counsel, said that she had the right to do so since the OHCHR can keep information on all matters pertaining to human rights from all over the world.

Finally, on 3 March 2011, the Court issued the written order that Teesta Setalvad should not send any communication to the OHCHR in Geneva regarding information on the proceedings surrounding the investigation of the massacre.

It shows that Teesta’s trust and respect for judiciary is selective. If judgements are in her favour, only in those cases she respects the judiciary. She had been most adverse and dubious so far.

Now she is under arrest and Gujarat police is investigating to find out the facts behind the entire conspiracy. Let’s wait to know more sensational information in future.

(The author is a veteran journalist, Editor In Chief of Jan Man India (gujarati news portal) and Consulting Editor of ITV Network.)

SOURCE : According to an article written by Consulting Editor of ITV Network and the Editor-in-Chief of Jan Man India for the prestigious national news paper The Sunday Guardian.